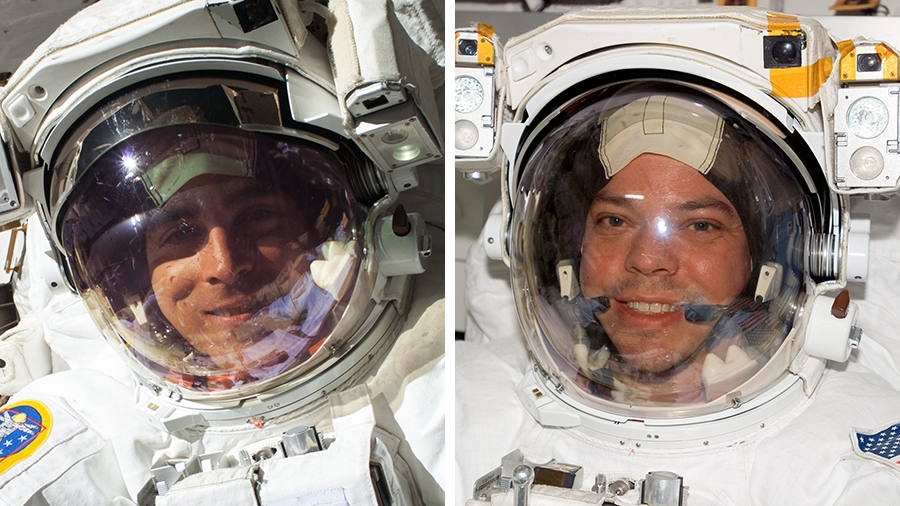 NASA astronauts Chris Cassidy and Bob Behnknen will step outside the International Space Station today (June 26) to take a seven-hour spacewalk and you can watch it live here, courtesy of NASA TV.

The spacewalk will begin at 7:35 a.m. EDT (1135 GMT) and last about seven hours. During that time, Cassidy and Behnken will begin work to replace the station’s old port side nickel-hydrogen batteries with new lithium-ion batteries for the outpost’s solar arrays. It is the first of four spacewalks in upcoming weeks dedicated to the power system upgrade.

NASA astronauts Chris Cassidy and Robert Behnken are scheduled to go outside the International Space Station (ISS) Friday, June 26, and Wednesday, July 1, for spacewalks to begin the replacement of batteries for one of the power channels on the orbiting laboratory.

Cassidy, the commander of Expedition 63, and Behnken, who joined the crew May 31 after arriving aboard SpaceX’s Crew Dragon with NASA astronaut Douglas Hurley on NASA’s SpaceX Demo-2 test flight, will depart the Quest airlock for both spacewalks. The briefing also will include an update about the Crew Dragon’s mission to the orbital outpost.

The spacewalking astronauts will replace aging nickel-hydrogen batteries for one of two power channels on the far starboard truss (S6 Truss) of the station with new lithium-ion batteries that arrived to the station on a Japanese cargo ship last month. The battery replacement work is the culmination of power upgrade spacewalks that began in January 2017.

For almost 20 years, humans have lived and worked continuously aboard the International Space Station, advancing scientific knowledge and demonstrating new technologies, making research breakthroughs not possible on Earth that will enable long-duration human and robotic exploration into deep space. As a global endeavor, 239 people from 19 countries have visited the unique microgravity laboratory that has hosted more than 2,800 research investigations from researchers in 108 countries and areas.

For more information about the International Space Station, its research, and crew, visit:

SpaceX will launch its tenth batch of Starlink internet satellites today, June 26, and you can watch it live here beginning at about 4 p.m. EDT (2100 GMT).

A Falcon 9 rocket will launch the Starlink mission at 4:18 p.m. EDT (2118 GMT), with SpaceX’s webcast beginning about 15 minutes before liftoff. The mission is carrying 57 Starlink satellites and two BlackSky Global Earth-observing satellites under a rideshare agreement with Spaceflight Inc.

The first-stage booster for this flight is making its fourth trip to space. It was used to launch SpaceX’s uncrewed Demo-1 Crew Dragon mission in 2019, three Radarsat satellites for Canada and another Starlink mission earlier this year. The booster is expected to land on SpaceX’s drone ship “Of Course I Still Love You” in the Atlantic Ocean shortly after liftoff.

SpaceX is targeting Friday, June 26 at 4:18 p.m. EDT, 20:18 UTC, for launch of its tenth Starlink mission, which will include 57 Starlink satellites and 2 satellites from BlackSky, a Spaceflight customer. Falcon 9 will lift off from Launch Complex 39A (LC-39A) at Kennedy Space Center in Florida.

Falcon 9’s first stage previously supported Crew Dragon’s first demonstration mission to the International Space Station, launch of the RADARSAT Constellation Mission, and the fourth and seventh Starlink missions. Following stage separation, SpaceX will land Falcon 9’s first stage on the “Of Course I Still Love You” droneship, which will be stationed in the Atlantic Ocean.

You can watch the launch webcast here, starting about 15 minutes before liftoff. If you would like to receive updates on Starlink news and service availability in your area, please visit starlink.com.

‘ISS Live!’ Tune in to the space station

Find out what the astronauts and cosmonauts aboard the International Space Station are up to by tuning in to the “ISS Live” broadcast. Hear conversations between the crew and mission controllers on Earth and watch them work inside the U.S. segment of the orbiting laboratory. When the crew is off duty, you can enjoy live views of Earth from Space. You can watch and listen in the window below, courtesy of NASA.

“Live video from the International Space Station includes internal views when the crew is on-duty and Earth views at other times. The video is accompanied by audio of conversations between the crew and Mission Control. This video is only available when the space station is in contact with the ground. During ‘loss of signal’ periods, viewers will see a blue screen.

“Since the station orbits the Earth once every 90 minutes, it experiences a sunrise or a sunset about every 45 minutes. When the station is in darkness, external camera video may appear black, but can sometimes provide spectacular views of lightning or city lights below.”

NASA astronaut Stephanie Wilson on going to the moon, Mars and leading the next generation

NASA wants a return to the moon in 2024. New human spaceflight chief makes no guarantees.