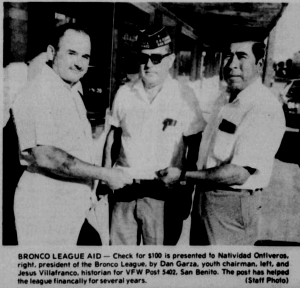 Special to the PRESS/NEWS

Editor’s note: This article is based on accomplishments of Natividad Ontiveros, written by the late Ray Avila.
Natividad “Tivo” Ontiveros passed away last Friday; he ran the San Benito Youth Baseball League as president for 20 plus years along with his wife.

In 1975, there was only one baseball league in San Benito, and after Rey Juarez left, Mr. Natividad “Tivo” Ontiveros became the league’s new president. He stayed as president for the next 20 years.

At that time, they had a total of 13 teams, boys only.

There was only one baseball field and all had to share the field. The Shetland and Pinto divisions played first, then the Mustang followed. The Pony teams played the last games of the evening.

In those years, all coaches assisted league operations since they were all board members also.

Since the league did not provide the maintenance for the field, many parents, coaches, and Ontiveros himself volunteered to cut the grass and maintain the field.

Mayor Cesar Gonzalez wanted to build a bigger and better baseball park to accommodate more teams. The new baseball park was eventually built on Stookey Road. It had four fields, one for each division (Shetland, Pinto, Mustang, and Pony). Somehow everybody started calling the new baseball field Stookey Park and, to this day, is still called by that name.

When it came to buying equipment for the league, Mr. Ontiveros would purchase it from local sports retail stores. Sometimes he would go to the Sportsman store and buy everything that was left over after the season was over. He would buy baseballs, bats, gloves, and other equipment for the following season.

During those years, the Shetland and Pinto teams wore only jeans and T-shirts. The two older groups did play with matching uniforms. Also at that particular time, the coaches had nothing to do with the purchasing of uniforms for their respective teams. Mr. Ontiveros would ask local businesses and organizations such as the Knights of Columbus and the Elks to help pay for the uniforms.

Editor’s note: This article has been edited for length. To read the full story, click here or make sure to grab a copy of the July 24-30, 2020 issue of the NEWS.