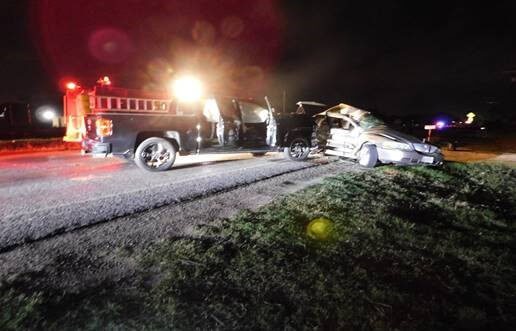 Shown is the scene of the car accident that took the lives of Christian Valdovinos and Eliseo Saldivar. (Photo Courtesy of Texas DPS)

On Monday, April 5, a car accident occurred on FM 732 killing two San Benito teenagers.
16-year-old Christian Valdovinos was rushed to the hospital and died from his injuries. Three days later, on April 8, Eliseo Rene Saldivar, 15, died from his injuries. The crash took place at about 7:40 p.m.
An initial investigation by the Texas Department of Public Safety (DPS) reported that the vehicle which contained three people was traveling north on FM 731 when the driver lost control and swerved into a ditch. The driver attempted to reenter the road but crashed into a black Chevrolet Silverado.
According to DPS alcohol is said not to be a contributing factor. Both drivers were transported to the hospital and are in stable condition.

The DPS is currently investigating the accident.

Permanent link to this article: https://www.sbnewspaper.com/2021/04/15/car-accident-leaves-two-sb-teenagers-dead/