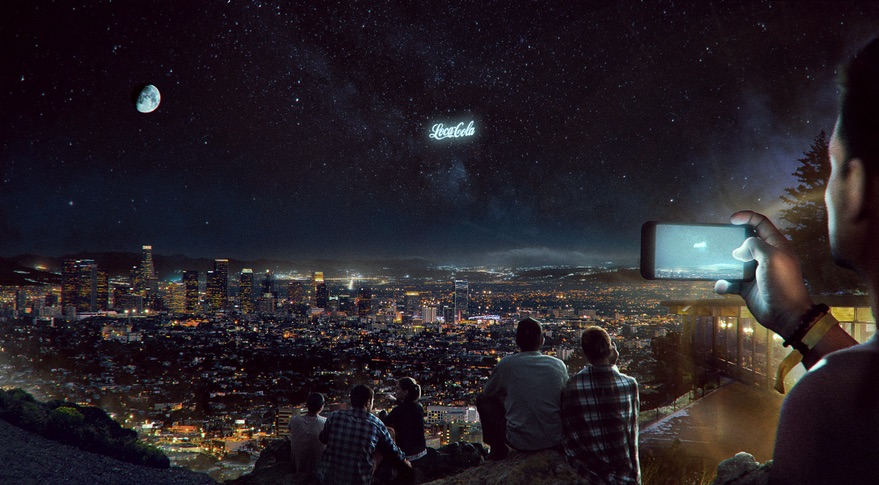 Sarah Mohamed is director of operations & strategy at Quill Communications, a company based in the United Arab Emirates. She contributed this article to Space.com’s Expert Voices: Op-Ed & Insights.

Picture this: An astronaut in zero G, multi-channel streaming a mission to Mars. In his or her hand is a half-eaten, well-known chocolate bar wrapped in black, red and gold foil. He or she tells the camera that “this Mars bar tastes as out of this world as the planet Mars looks.” It’s corny and delicious, and it’s the kind of celestial marketing opportunity that big companies fantasize over.

And, if Russian startup StartRocket has any say in the matter, then we may actually see such off-Earth product placement in our lifetime. Chocolate bars may not make it to Mars just yet, but StartRocket intends to “enhance” low Earth orbit with 30-foot long, sunlight-reflecting company logos that would be visible from almost anywhere in the world.

You can’t argue with the meteoric impact of global marketing campaigns that reclaim the night sky as an endless empty billboard. Just think of the reach!

But how did we get here? And is this the right way to approach space marketing?

Let’s take one small step back for context, and one giant step toward alternative (less obtrusive) orbital opportunities

You don’t have to fill space with luminous logos or eat chocolate on a spaceship to be the brand on everyone’s lips.

In fact, your brand doesn’t have to leave planet Earth at all. The space value chain is gleaming with opportunities for enterprising marketers with eyes on the sky and visionaries on the ground, and there’s never been a better time to join the race.

Historically, space has always lived on the furthest edge of commercial possibility. Too governmental. Too capital-heavy. Too high-risk. Return on investment (ROI) too far in the future for a lifetime’s work. Agencies like NASA and the European Space Agency (ESA) placed a Hollywood-like distance between ordinary people and space exploration, so that everything above us seemed inaccessible, out of bounds and entirely out of scope.

But 19 years ago, a serial entrepreneur named Elon Musk decided that humanity needed a survival strategy with a multiplanetary design. His planet-shaped Plan B became SpaceX, and off the back of his quest to create affordable, reusable rockets, an industry boom was born.

“The space industry has enjoyed a honeymoon period with hundreds of startups popping up in the past five to seven years following SpaceX’s success,” TechCrunch recently reported. Meagan Crawford, a venture capitalist at Spacefund, goes as far as saying that there is “almost no correlation between the global economy and the space industry.” So, while we experience economic downturns in almost every industry on Earth, space remains true to its nature: far and away from everything we know in this world, abundant with untapped opportunity.

Cause marketing budgets for deep impact

Space startups are being funded, projects are taking off and somewhere in the marketing mix is a promotion that’s missing its place. Every single year big companies spend billions of dollars on advertising ($4.24 billion in 2019 by Coca-Cola alone, if you’re interested), but what if we direct those advertising dollars toward the stars? What if we take those dollars and put them to work in space?

As of the most recent figures, there are 34,000 pieces of documented space junk hurtling around our home planet in a hectic orbit of human waste (nice job, humanity). With an orbital velocity of about 17,500 mph (28,160 kph), space junk is deadly to space missions and astronomically expensive to dispose of. Case in point: ESA recently partnered with Swiss startup ClearSpace to remove a single 220-lb. (100 kilograms) piece of debris, at a cost of $103 million.

Maybe the final frontier of marketing isn’t putting your logo in the sky or putting a Coke can in an astronaut’s hands. Maybe space marketing opportunities should focus on preserving our celestial environment and engaging consumers in a much bigger global conversation.

Marketing missions crewed for the improvement of humankind

Funnelling bloated budgets toward space-cleaning missions is one way global brands can make an impact that’s out of this world. The ROI of an environment-saving contribution like removing space debris is a culture-shifting act that would be talked about for years to come, not only because you’ve supported a galactic cleanup, but because of the domino effect that follows. Less space debris means less risk to space missions. The removal of space junk may decrease future mission costs by 5 to 10%. An increase in our access to space directly supports research, technology, medical advances and even internet advancements on Earth.

For anyone at the back of the room arguing for the preservation of our Earth before we tackle space, know that every time we venture into the cosmos, we benefit from advances in science and technology that frequently end up supporting humanity’s betterment and survival. The journey to developing the International Space Station and maintaining its presence in space is responsible for advances like:

And what environmentally responsible, forward-looking company wouldn’t want the accolade of global impact attached to its brand’s mission? Cause-minded millennials “are ready to reward or punish a company depending on its commitment to social and/or environmental causes.” Fostering millennial influence through a commercial commitment to space exploration is a strategy that not only addresses this truth but understands the sophisticated consumer of today.

So what can you do?

Cause loyalty can increase lifetime profits by 85%, and getting in at the ground floor of the boom is the best way to leverage the opportunity at hand. And that boom could be pretty big. The global space industry could generate more than $1 trillion of revenue by 2040, compared to about $350 billion today, Morgan Stanley estimates.

The U.S. contribution to space exploration began in the 1960s, and it’s still paying dividends today. Today, the U.S is at the frontier of the knowledge economy because of actions it took over 40 years ago, and now there’s another opportunity to ride the galactic gravy train.

A young growth economy like the United Arab Emirates has recognized this opportunity. In less than a decade, the nation sent its first astronaut to space, launched a probe to Mars and commenced work on its first lunar rover.

The outcome of this boom is an untapped ecosystem whereby the end state is a win-win-win situation for three parties: the space industry, which benefits from increased funding, awareness and education; big corporations and brands, which benefit from shiny cash-boosting causes that make them stand out from the crowd; and public-relations and communications agencies, which benefit from the creative challenges presented by space and the opportunity to do something completely new, on a platform so new that we’ve only just begun to scratch at its commercial potential.

Dovetailing galactic causes with Earthly marketing opportunities is bigger than satellite-powered billboards and chocolate on a rocket; it’s an opportunity to shine a light on the most important scientific research and innovation of our generation, and the launch pad for success is defined and limited only by the daring of companies willing to take one small step for customers and one giant leap for the future of customer-kind.

Follow all of the Expert Voices issues and debates — and become part of the discussion — on Facebook and Twitter. The views expressed are those of the author and do not necessarily reflect the views of the publisher.