Stone Cold Steve Austin has had some iconic rivalries, and during his heyday, the Texas Rattlesnake was one of the most sought-after names in the WWE.

Almost every WWE superstar wanted to work with Steve Austin when he was at the top of his game, and Kurt Angle was also one of the hopefuls.

During a recent edition of ‘The Kurt Angle Show’ on AdFreeShows.com, the Olympic gold medalist opened up about a Monday Night RAW match from 2001 against Chris Benoit and how the bout ‘scared away’ Steve Austin.

Kurt Angle took on Chris Benoit in a Steel Cage match during the RAW main event on July 11, 2001. Angle and Benoit were involved in several dangerous spots throughout the 15-minute contest, including a German suplex off the top rope.

Kurt Angle and Chris Benoit were still relatively new to the WWE landscape, but they were on their way towards superstardom. Steve Austin was one of the keen viewers of the match, and Angle noted that he and Benoit wanted to impress Stone Cold.

I think we went way too far: WWE Hall of Famer Kurt Angle 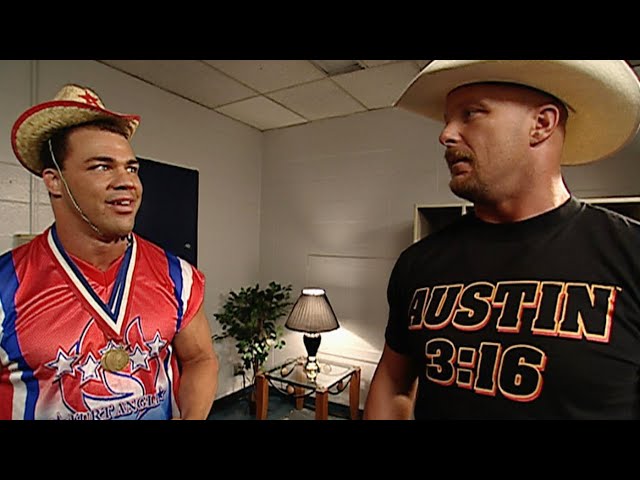 Kurt Angle and Chris Benoit both wanted WWE programs with Steve Austin, and a solid performance on RAW would have increased their chances of securing a massive feud with one of WWE’s biggest draws ever.

Instead of making a positive impression, Angle and Benoit allegedly startled Austin because of the high-risk nature of their match.

The WWE Hall of Famer didn’t want to work with Benoit and Angle at the time as he felt they were just too crazy in the ring.

Steve Austin even told Kurt Angle several years later that he was hesitant to wrestle them after watching the match mentioned above.

“We were upcoming talent. Austin was out there watching the match. We were trying to impress Austin. I think we went way too far because we actually scared him away. We were trying to show him that we wanted to work with him, and he’s like, ‘these guys are crazy bastards, I’m not going to work with them.’ You know, he even told me that later down the line, and we just threw everything in the kitchen sink into that match,” Angle added.

Chris Benoit and Kurt Angle left no stone unturned as they pulled out some massive spots for the match. Thankfully for the wrestlers involved, there were no serious injuries, and the only negative takeaway was Austin’s reaction. Kurt Angle added that they had to find other ways to regain Steve Austin’s respect after the WWE match.

“Chris and I were crazy that night; his flying headbutt off the top, my moonsault, they all could have been finishes, and you know; unfortunately, we went a little further forward. Fortunately, nobody got hurt, but the match turned out to be incredible. But, from a working standpoint of wrestling Austin, it didn’t appeal to him to want to work with us. We had to earn his respect back eventually in another way,” Angle stated.

The latest episode of ‘The Kurt Angle Show’ revolved around the WWE Legend’s classic WWE King of the Ring match against Shane McMahon and several other stories from 2001.

If any quotes are used from this article, please credit The Kurt Angle Show and give a H/T to Sportskeeda Wrestling.