FC Dallas has been on the road four times this season and come back without points on all four trips. No wins, no draws, only losses.

So, as FC Dallas travels for the fifth time this year for Wednesday’s game against the LA Galaxy, it’s time to shake things up a little bit.

“We have to do something different away,” FC Dallas head coach Luchi Gonzalez said this week. “This season, the only way we’re going to achieve our goal is to send a message away. We haven’t done that yet.

“At the end of the day, we’re still picking up points at home, but obviously not to the standard, so we’ve got to make that up away and our backs are against the wall now. It’s now or never to do that against LA Galaxy. In a short amount of time, we’ve got to regroup and show another response.”

There is added urgency on FCD’s players because of disappointing results at home. After a win against the New England Revolution last week raised optimism that the team was charging back into the playoff places, Sunday’s 2-2 draw with the Vancouver Whitecaps was a disappointing return to form.

“Drawing at home isn’t the result we want. We want to get the maximum points at home and we haven’t taken advantage,” Gonzalez said. “Now we have to make the difference up away from home. This game has to count for us.”

While the coach is ready to make some moves, they may be more about the way the team prepares rather than anything shown on the field. FCD winger Szabolcs Schon is traveling and eligible for the first time since participating in the Euros with Hungary, but defenders Matt Hedges and Jose Martinez are still out and midfielder Tanner Tessmann is being held out ahead of a potential transfer.

Yet, while the structure and game plan have contributed to some of the road woes, Gonzalez and Bressan both said the mental component is where the team can improve the most.

“I think the coaching staff is doing the right things; tactically, we know what we have to do. I think we need to go and play like we’re playing at home,” said Bressan, a defender who has captained the team in the last two matches. “Now is the time. Now, against the Galaxy, we’re thinking only about this game because it’s three big points so it’s time to change things playing away and be better.”

FCD will get a bit of a reprieve Wednesday with LA Galaxy manager Greg Vanney saying Tuesday that forward Javier “Chicharito” Hernandez is unlikely to play. Hernandez, currently MLS’ leading scorer with 10 goals in as many matches, was replaced in the Galaxy’s starting lineup Sunday after feeling something in his calf during warmups. While his injury isn’t expected to keep him out long, the Galaxy aren’t expected to risk him or center back Sega Coulibaly.

The Galaxy already are somewhat thin at the back with a pair of players on international duty and another player suspended. Yet, even if the Galaxy are missing some key players, FCD knows it can’t take anything for granted.

“They don’t have just Chicharito, they have a lot of players that can be aggressive,” Bressan said. “They have verticality on the last line. I think it’s a team job. We have to respect them.”

That respect, however, must be balanced with confidence. FCD has had a much better opening half-hour in its two most recent matches, scoring first against both the Revs and the Whitecaps, with both goals coming from forward Ricardo Pepi.

“We need to play that same way on the road,” midfielder Paxton Pomykal said. “Don’t be timid. Go out there and play our way, play our style. We know we haven’t played the best on the road, but that’s going to turn around.”

Gonzalez said he doesn’t expect anyone outside the FC Dallas community to believe in the team to pull off that turnaround since the team is yet to give pundits or skeptical fans many reasons to believe.

Wednesday is a chance to prove some doubters wrong and show things really can be different for FCD on the road this season.

Jon Arnold is a staff writer at The Striker Texas, which partners with The Dallas Morning News to provide coverage of FC Dallas and other notable Texas soccer stories. Find more soccer coverage at thestrikertexas.com. 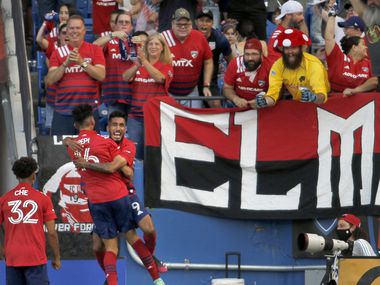