Noe and Amelia: A hometown hero and his wartime sweetheart 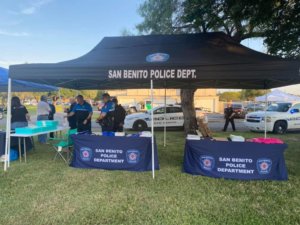 On Monday, Oct. 4. San Benito celebrated its 14th annual National Night Out for the first time since 2019.
Community members went down to Heavin Memorial Park at 705 N. Bowie St. to enjoy the festivities. Pony and train rides were available for children to enjoy. Attendees also enjoyed free food and drink. San Benito’s National Night Out took place from 7-9 p.m.
The event featured informational booths from other first responders such as the local Fire Departments Emergency Medical Services, and other law enforcement officers such as the Cameron County Sheriff’s Department have also attended the event. Booths from other local businesses and schools also attended the event.
National Night Out is an annual community-based campaign celebrated by communities across the United States. The campaign began in 1984 and focuses on building police-community partnerships and build relationships with the surrounding neighborhoods.

Citation By Publication (Joe A

Permanent link to this article: https://www.sbnewspaper.com/2021/10/07/san-benito-hosts-annual-national-night-out/