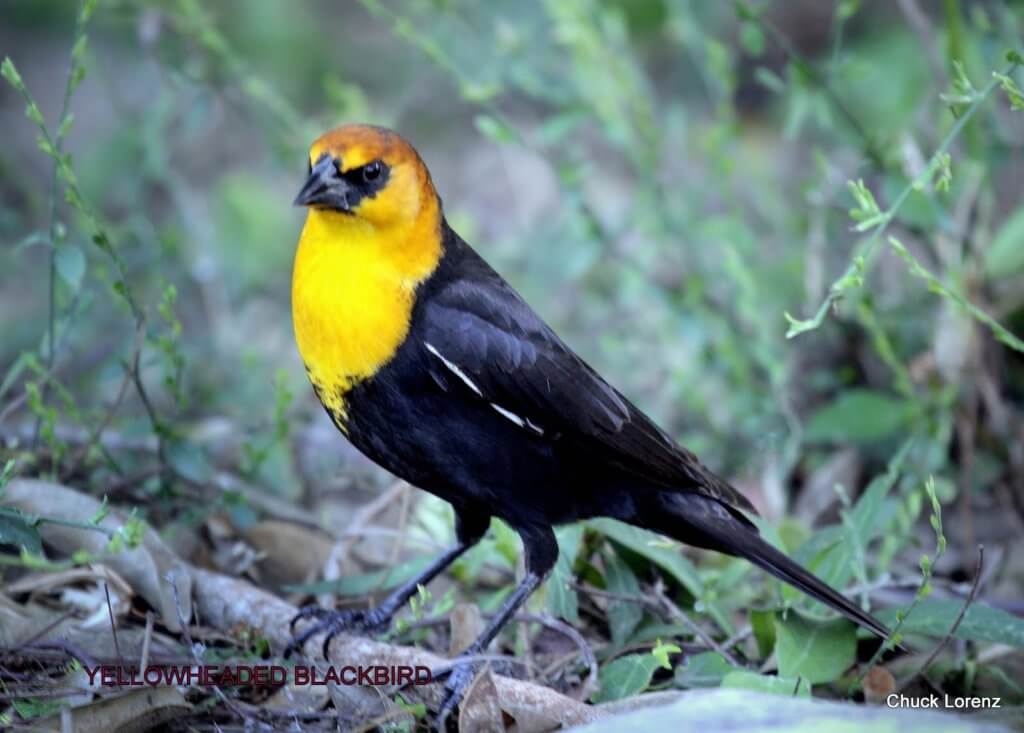 Throngs of noisy, migrating male yellow-headed blackbirds, heads and chests aglow in the setting sun, descended upon limbs and open swaths of lawn to forage for seeds and insects at the South Padre Island Convention Center last April. I can hardly wait to see them again.

Our wondrous spring fall-out—during which fatigued and famished migrants stop to rest and refuel, will continue through May, with species following their varied timetables.

The male’s brilliant yellow feathers contrast handsomely with his velvety black plumage, including an eye patch extending to a dark, sharp bill. He brandishes a white wing-patch in flight.

The less conspicuous female has a whitish or yellowish throat, chin and cheeks, and a light yellow, streaked chest which brightens in wintertime. This stout blackbird (Xanthocephalus xanthocephalus), whose doubled scientific name is Greek for “yellow-headed”, is the species’ sole representative.

This blackbird breeds in freshwater marshes and reed-bordered lakes from Canadian grasslands down through much of the West and Midwest. It breeds as far south as the northern Texas Panhandle and winters in Mexico, Central America and parts of the Southwest.

Especially during wintertime, yellow-heads forage for seeds— about 2/3 of their diet—in marshes and grasslands. During breeding season, they, especially females, devour more insects—which they can catch in midair—snails, tadpoles and such. Like fellow blackbirds, they follow plows to snap up exposed worms and grubs.