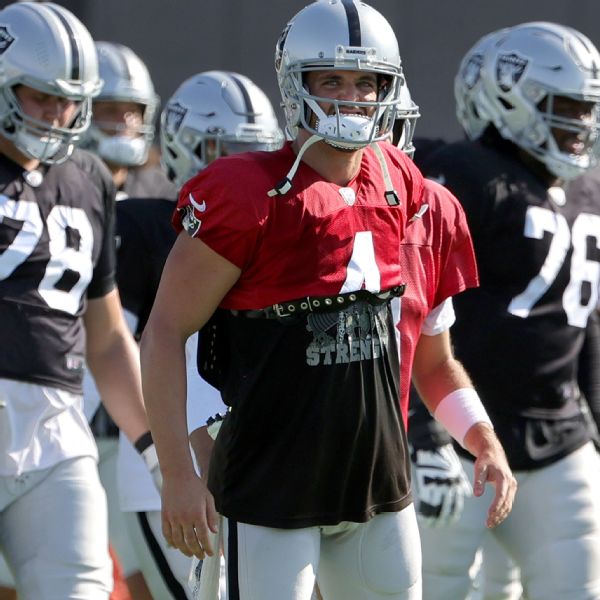 HENDERSON, Nev. — A chagrined Derek Carr was asked Tuesday if he was immune to stories about his future as Las Vegas Raiders quarterback, in the wake of the assertion this past weekend by UFC president Dana White that he had brokered a deal for Tom Brady to come to the Raiders in 2020.

White, on the UFC With the Gronks broadcast on ESPN and ESPN+ for UFC 278 on Saturday night, was asked by Rob Gronkowski to tell the tale.

“I worked to put that deal together for Brady and Gronk to come to the Raiders,” White said on the broadcast. “It was almost a done deal. And at the last minute, [Jon] Gruden blew the deal up and said that he didn’t want him and all hell broke loose, man. It was crazy.

“And Brady was already looking at houses. It wasn’t said yet that Gronk was going to be coming. So Las Vegas would have had Brady and Gronk the year that the Bucs won the Super Bowl except Gruden blew the deal up.”

Gruden, who signed a 10-year deal to coach the Raiders in 2018, resigned after five games last season following reports of anti-gay and misogynistic language in his emails.

It was in June 2021 when Brady, on HBO’s “The Shop,” said there was a team that had initially shown interest in him in free agency before shutting it down.

Carr, who has been with the Raiders since 2014, said Tuesday he did not immediately hear of White’s comments as he was helping someone in the Raiders organization deal with a death.

“It was a moment to put things in perspective,” Carr said. “It really doesn’t matter. At the end of the day, anything I say will just be blasted out there so I’m just going to completely remove myself and just keep trying to play football. It’s been nice just answering football questions.

“Hopefully, no more drama in the city.”

The Raiders played host to the New England Patriots on Tuesday for the first of two joint practices at the team facility. All was tame after the Patriots brawled with the Carolina Panthers last week and the Raiders fought with the Los Angeles Rams last year.

Carr said with Raiders first-year coach Josh McDaniels, a student of Patriots coach Bill Belichick, a point of emphasis was made to not fight in the practice.

“Joint practices, they show more stuff [so] it’s not as vanilla,” Carr said. “That’s something I’ve always loved about it. And when you practice [with] two coaches that know each other, too, I mean the guys are keeping each other safe. So you’re getting full speed to impact. You know who won the rep. I just love the different looks you get. It’s a different defense. It’s a different philosophy.

“I think you can get a lot accomplished, rather than just 14 or 15 snaps in a preseason game.”