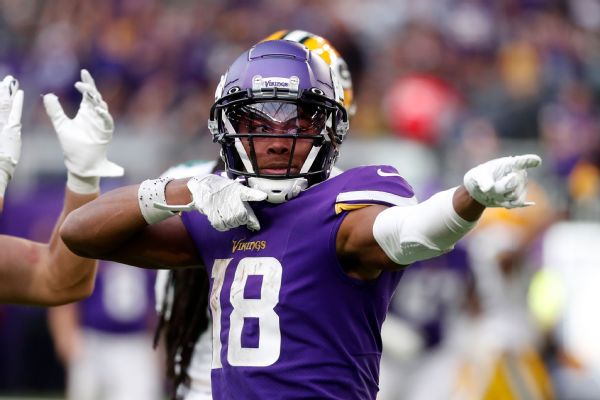 MINNEAPOLIS — It was a scene the Minnesota Vikings could only dream of. Superstar receiver Justin Jefferson ran wild Sunday through the Green Bay Packers secondary, hauling in a slew of wide-open passes on the way to the best game of his career.

Jefferson had nine receptions for a career-best 184 yards and two touchdowns as the Vikings pounded their NFC North rival, 23-7, at U.S. Bank Stadium. But it was the nature of Jefferson’s catches that were so stunning.

Jefferson averaged 4.0 yards of separation on his 11 targets, according to ESPN Stats & Information research, and gained 138 of his receiving yards on plays when he had at least 3.0 yards of separation. And on a 64-yard haul that set up a field goal in the second quarter, there was not a defender within 10 yards of him.

“I was thinking somebody was about to come from behind and tackle me,” Jefferson said. “I thought [Packers cornerback Jaire Alexander] had run with me. But he wasn’t there. It kind of shook me up a little bit, but I’m glad I got into the end zone.”

The Vikings were playing their first game in new coach Kevin O’Connell’s scheme, and Jefferson said he expected to see the usual double teams and cloud coverages he has grown accustomed to during his first two seasons in the league. He was surprised, however, to see the Packers did not consistently ask Alexander to follow him in coverage.

Alexander was surprised, as well. Asked about the potential matchup, Alexander first made the zipping-the-lips motion and then said: “All week, [he was] asking for that matchup. But it ain’t about me. It’s about the team. It ain’t about me. If it was my way, you know what I would be doing.”

O’Connell’s scheme was partly responsible. Jefferson lined up all over the field, making it difficult to track him. Jefferson took 41 snaps on the outside, 12 in the slot, two in the backfield and one as a tight end. Nearly half of his yardage total (91) came on those plays from the slot with the other 93 from the outside, making him only the second player in the past seven seasons to accumulate at least 90 yards from both the slot and the outside.

Jefferson also went into pre-snap motion on seven snaps and was targeted on four of those plays, including a 5-yard touchdown reception in the first quarter.

“I definitely like the motioning,” Jefferson said, “and just seeing the whole field. I’m pretty sure I’m going to do it a lot more.”