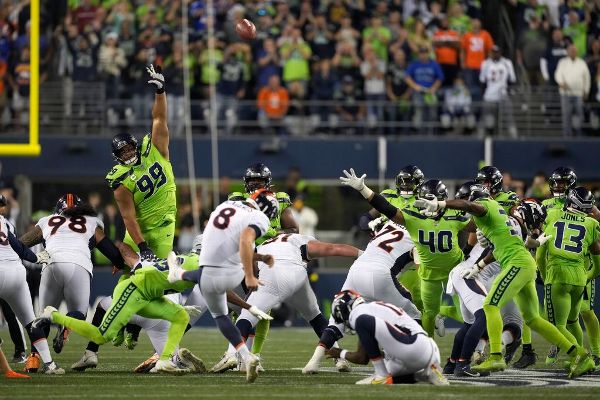 SEATTLE — There will be many games still to come in of Russell Wilson‘s Denver Broncos career.

But in his first start with his new team as well as his first return engagement to the city where he played his first 10 NFL seasons, the quarterback the Broncos traded five draft picks and three players for — the one they signed to a $245 million extension earlier this month — was the second choice with season opener on the line.

Wilson’s stat line certainly looked the part in the 17-16 loss to the Seattle Seahawks at Lumen Field. He finished the emotional evening 29-of-42 passing for 340 yards and a touchdown.

But with 20 seconds to play, trailing by one, Broncos coach Nathaniel Hackett chose to have Brandon McManus attempt a 64-yard field goal for the win instead of letting Wilson try to lead a play on fourth-and-5 at the Seahawks’ 46-yard line.

“We were right on the line [of McManus’ range],” Hackett said. ” … Brandon gave it his best shot … obviously I wish we would have gotten a lot closer, it put us in that weird spot because we were in that field goal range … we just made that decision and take our shot there.”

“We got the best field goal kicker maybe in the game,” Wilson said. ” … We got there and unfortunately it didn’t go in … I believe in coach Hackett, I believe in what we’re doing, I believe in everything.”

As Wilson added, “I don’t think it was the wrong decision.”

McManus’ first attempt sailed wide left, but Seahawks coach Pete Carroll had called a timeout just before the snap. Hackett said he didn’t consider sending the offense back on the field after the negated miss because “I was happy he got that one out of the way. We had plenty of distance and thought we would be able to make it.”

McManus’ second attempt also sailed wide left and Seahawks quarterback Geno Smith, who won a training camp battle over Drew Lock to win the job as Wilson’s successor, took a knee on three snaps to close an emotional night all around. Lock was one of the three players the Broncos had sent to the Seahawks in the March blockbuster.

“This was a special game, just because I got to see and play against some of my closest friends,” Wilson said. ” … I wouldn’t be where I am today without this place … but I didn’t play [tonight] for just this one game, I’ve got a bigger mission.”

Almost from the moment the full NFL schedule was released, the Wilson-Seahawks reunion was circled on plenty of calendars. Wilson, his new teammates with the Broncos and the Seahawks all publicly had played the just-another-game card.

But the answer to the question of whether or not Wilson would be booed after 10 seasons in Seattle that included nine Pro Bowl selections, two Super Bowl trips and one Super Bowl win was answered from the moment Wilson took the field for pre-game. The Seahawks faithful booed lustily throughout.

The crowd, as if it was effort to show many of those on hand had moved on, even chanted “Ge-no, Ge-no, Ge-no” whenever Smith made any plays of note, and Seahawks coach Pete Carroll was often gesturing to the crowd to get louder whenever the Broncos had the ball. The crowd chanted Smith’s name as the quarterback took those final kneel-downs to seal the win.

“It didn’t bother me,” Wilson said. “It was a hostile environment, it always has been. I didn’t expect to get a round of applause every once in a while. I gave everything I had here every day, every day, and anybody that says anything else, they’re completely wrong.”

Wilson and the Broncos’ offense had a toned down start, given Wilson didn’t target a wide receiver on a pass attempt until he hooked up with Jerry Jeudy on a 67-yard catch-and-run touchdown with 5 minutes, 34 seconds left in the first half. But overall, even as they got things cranked up, the Broncos couldn’t turn their 433 yards worth offense into enough points.

Running backs Melvin Gordon III and Javonte Williams each lost fumbles on plays that started at the Seahawks’ 1-yard line to negate two scoring drives and the Broncos failed to score touchdowns on their other two trips inside the Seattle 20-yard line.

Toss in the Broncos’ 12 penalties (for 106 yards) and the Seahawks won despite just 253 total yards and no second-half points on offense.

“I think he played really well, he took care of the football, he made really good decisions, he had some explosive plays, he was able to distribute the ball all over the field,” Hackett said. “That’s what makes me really frustrated for him.”

On the other hand Smith was almost perfect in the first half. Smith completed his first 13 passes of the game, was 17-of-18 with two touchdowns as the Seahawks had a 17-13 halftime lead. The Broncos defense pitched a shutout in the second half.

“We kind of got the jitters out (in the first half),” said Broncos linebacker Bradley Chubb. ” … When we tuned it in … we got back on track.”

Wilson had arrived to the stadium in a fashion-week worthy ensemble several hours before kickoff, and almost every moment was a reunion of sorts as he moved through the stadium and through his warm-ups.

A handshake here, a wave there, Wilson went about the business of attempting to at least continue to stick to the script he and the rest of the Broncos had tried to keep to all through the days and weeks leading up to Monday’s game.

For Seahawks cornerback Richard Sherman showed on stadium video boards 30 minutes before kickoff to a loud ovation. And former Seahawks running back Marshawn Lynch was another of several former Seattle players roaming the sidelines during warmups.

It all ended with McManus’ miss and a celebration by the “12s” Wilson had hoped would welcome him back.

Tonight was special,” Wilson said. ” … It was still a special environment in a place that I love.”